Tennessee Caves – The Dark, Hard Underbelly of the Volunteer State

A haven for spelunkers, there are more than 8,350 documented Tennessee caves. According to the National Caves Association, that is more than any other state in the country. This rich assemblage of caves, sinkholes, and underground waterways is collectively referred to as karst topology. It originates when soluble rock formations containing limestone, gypsum, or dolomite are eroded by surface water or rainfall that has taken up carbon dioxide from plants to produce a mild acid. This acid dissolves the limestone (calcium carbonate) to form a calcium bicarbonate solution, which trickles down into the cave to form a mineral called cave onyx.

Most of Tennessee’s caves line up along the western side of the Appalachian Mountains on the eastern side of the state. Many of them are located on private property, although there are plenty to go around for speleologists to hike, crawl, or swim around and explore. Speleologist is the fancy term for those who study caves and their environments.

Billed as the “greatest attraction under the Great Smoky,” the Forbidden Caverns are hidden beneath the Great Smoky Mountains slightly off the beaten path to Sevierville and a 45-minute drive from either Gatlinburg or Knoxville. As rich in history as they are in beauty, they are believed to be the final resting place of an Indian princess who became lost in a “hollow mountain of two streams,” which was, apparently, forbidden, and that’s how the caverns got the name. Four hundred years ago, the caverns were used by the Eastern Woodland Indians to provide winter shelter and a constant supply of crystal clear stream water. They drew from the sparsely available quantities of flint, a variety of chert, that was available to make knives, scrapers, and arrowheads.

The next known occupants of the caverns were moonshiners, who arrived in the early 20s and took advantage of the isolated location and abundant water supply until around 1943 to produce homemade whisky. 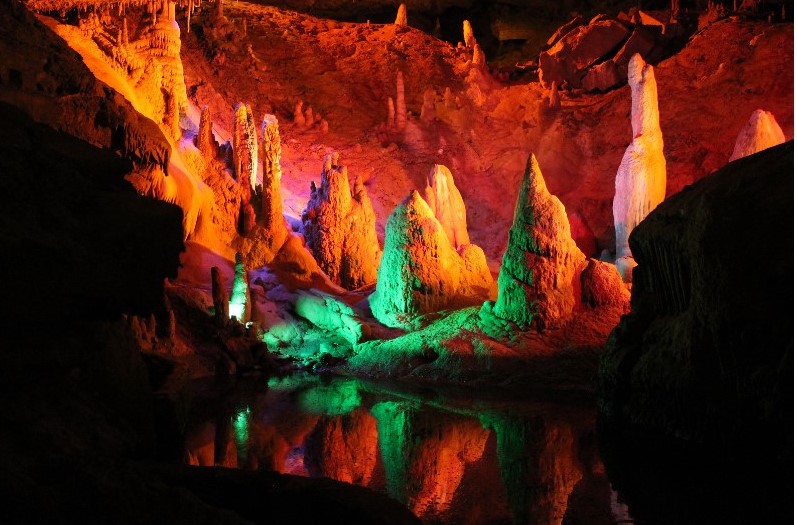 Figure 1- Forbidden Caverns, Sevierville. The dazzling colors in the Grotto of Evil Spirits are the result of the special lighting effects that, together with a stereophonic sound presentation and well-trained tour guides, are used to enhance the visitor experience. Photo: https://theblackbearblog.wordpress.com/2013/11/04/forbidden-caverns/

Experts believe the water in the caverns comes from an underground lake situated beneath English Mountain, which is famous for its spring water. A cool 58oF throughout the year, the caverns are also an ideal setting in which to brew and keep the uniquely English real ale. In 1964, the caverns were discovered by a group of businessmen, who invested time and money for three years before they opened the attraction to the public in 1967.

The average guided tour takes about an hour. Free parking is available for cars and buses. Amenities at the attraction include a picnic pavilion, souvenir shop and refreshments. You can get a buck or two off the price of entry with a page from one of the many coupon booklets available around the area or by searching online for “Forbidden Caverns promo codes.”

As you have probably gathered from the word root, “speleo,” speleothems are found in caves. The term refers to structures that are formed by the deposition of minerals from water. Among the types of speleothems to be found in the Forbidden Caverns are onyx deposits, cave draperies, and lucky fried eggs. 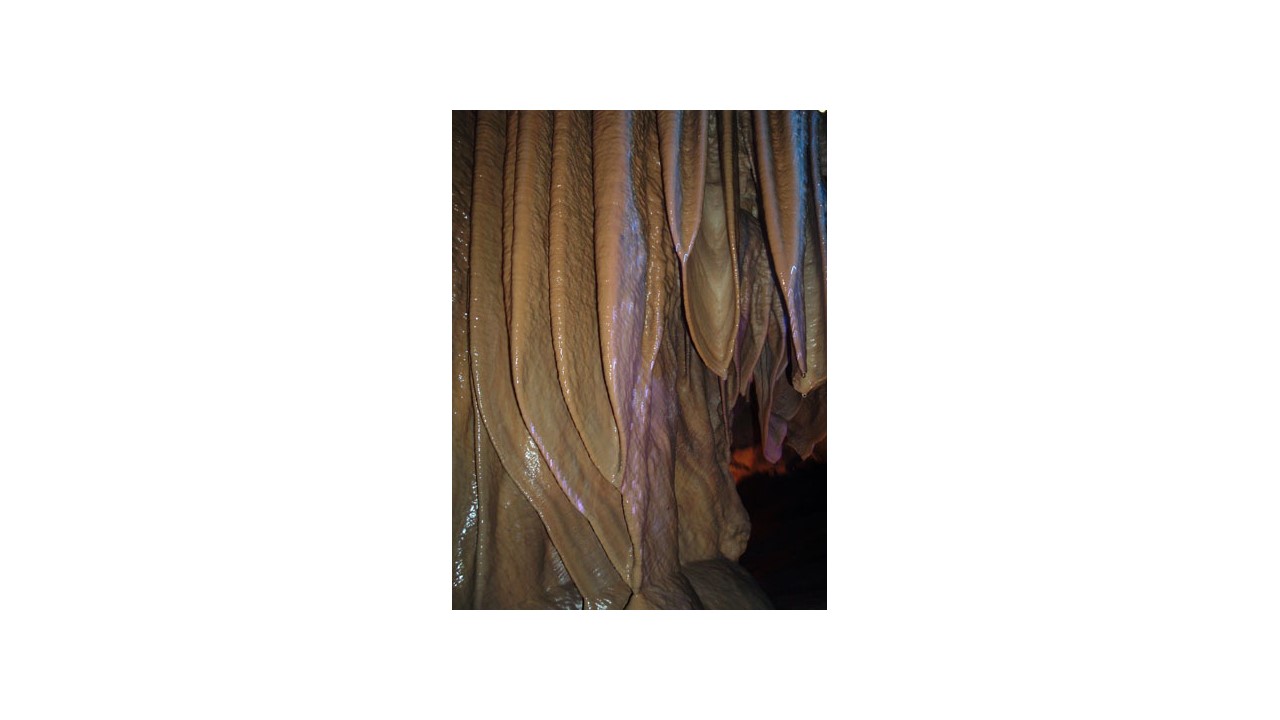 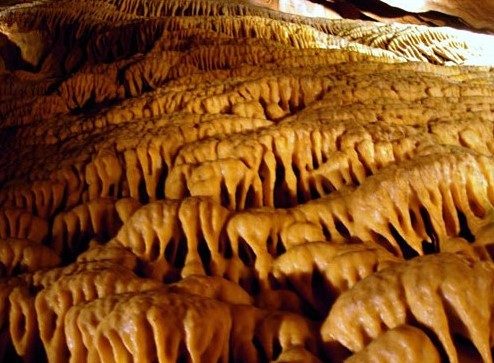 Figure 3 – One of the largest known deposits of cave onyx. Onyx and agate are types of chalcedony, a mineral oxide. Onyx is formed from parallel layers of cryptocrystalline silicate quarts and moganite. Photo: Forbidden Caverns Picture Gallery. 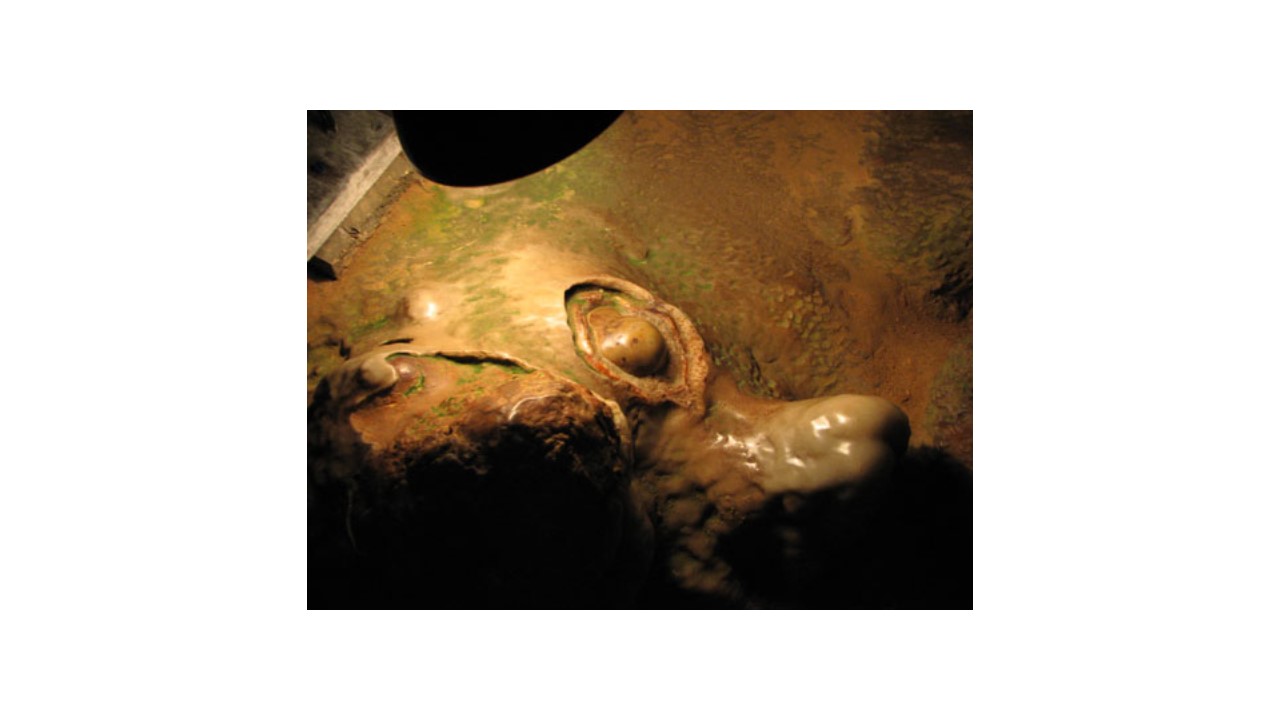 Figure 4 – Lucky Fried Egg, a speleothem formed when particles of dirt and rock are cemented together by drops of water flowing from a cave ceiling. Photo: Forbidden Caverns Picture Gallery.

The Lost Sea, America’s largest underground lake and the world’s second-largest non-subglacial underground lake, is tucked beneath Craighead Caverns, an extensive cave system located between Sweetwater and Madisonville. The visible portion of the lake measures 800 feet long by 220 feet wide. Underneath these 4.5 acres of water lies an even larger series of caves completely submerged in water. So far, 13 acres of caves have been mapped, although the boundaries of the system still have not been determined despite the efforts of teams of expert divers with modern exploration equipment.

History of the Lost Sea

Prior to the discovery of the Lost Sea by a 13-year-old boy named Ben Sands in 1905, the caverns were occupied by the Cherokee Indians. A large collection of artifacts, including arrowheads, pottery, jewellery, and weapons was found in a room about a mile inside the caves.

The earliest known resident of the Craighead Caverns has been identified as a giant Pleistocene jaguar. Some 20,000 years ago, the mighty beast lost his way in the darkness and plunged into a crevice. Evidence of his existence has been found in the form of footprints. Some of his bones, found in 1939, may be viewed in the American Museum of Natural History in New York alongside plaster casts of his tracks.

Like so many caves in Tennessee, the Craighead system was occupied by moonshiners taking advantage of both the seclusion and water supply. 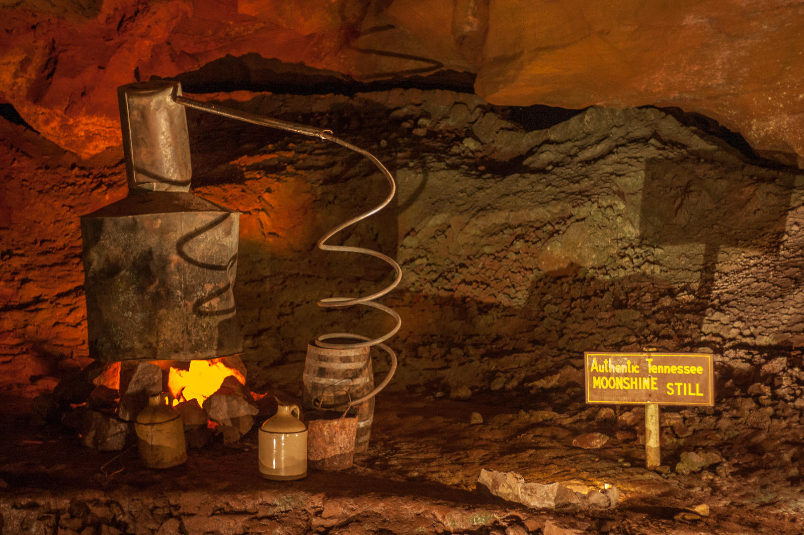 Flora and Fauna of the Caverns and the Lost Sea

The Craighead Caverns house a collection of rare, crystalline structures known as anthodites or cave flowers. Specimens of these fragile spiky clusters have been in only a handful of caves throughout the world. Their presence here led to the registration of the Lost Sea by the United States Department of the Interior as a National Landmark. Half of the world’s formations of anthodites are located here.

The Lost Sea is populated by rainbowless trout, whose ancestors had been released into the lake by residents who wanted to see if they would lead them to another body of water via some unseen conduit. The fish did no such thing, and eventually lost their eyesight, rainbow coloring, sex drive, and presumably their will to live. Because the lake sustains no other plant or animal life apart from the stony anthodites, they learned to pounce on unsuspecting rafts and launches visiting the area and beg for food. For the sake of curious visitors, the tour operator keeps their numbers topped up. 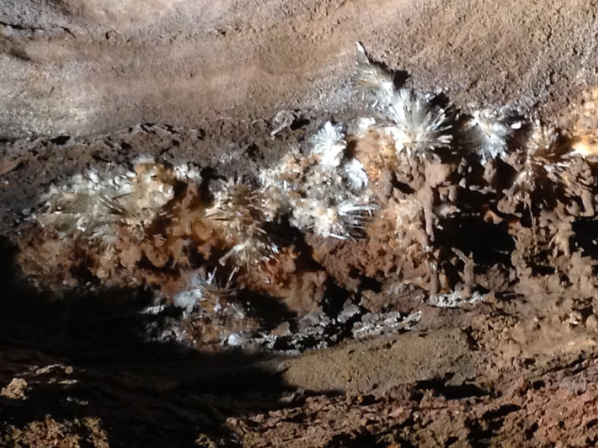 Daily tours of the Lost Sea begin with a three-quarter-mile round-trip stroll through the caverns on wide, sometimes steeply sloping pathways. Your entertaining guide will talk you through the history of the caves and offer a brief but informative tutorial of how the various rock formations you encounter were originally formed. Once you reach the bottom of the cave, about 140 feet below ground level, you will have a ride in a boat on the Lost Sea. The tour lasts approximately one hour and 15 minutes.

The Wild Cave Tour is designed for groups of at least 12 from schools, churches, scout troops, etc. After the regular cavern tour, guests are treated to a peak at the undeveloped cave rooms, where they are permitted to crawl through cracks and crevices. You’ll get tired, muddy, and probably a little bruised. Guests are invited to spend the night, but the accommodation is as basic as it gets, and you should expect to greet the daylight the next morning a little bit grubby. A specially prepared patch is available for sleeping, although you need to bring your own sleeping bag, air mattress, and/or ground cloth. Wet wipes, your own supply of bottled water, and a change of clothes are also vital.

Serious spelunkers can take part in the Super Saturday Adventure, which is also designed for groups of 12 or more who wish to spend the night in the caves. Individuals, small groups, and those who do not care to stay overnight are welcome to participate in the day’s activities, which involve crawling, climbing, rolling, and extricating yourself from tight spots not accessible to the public. According to the website, participants are advised to bring a change of clothes and a flashlight and to wear “old clothes that you don’t care if you will ever see again.” Long pants are essential. 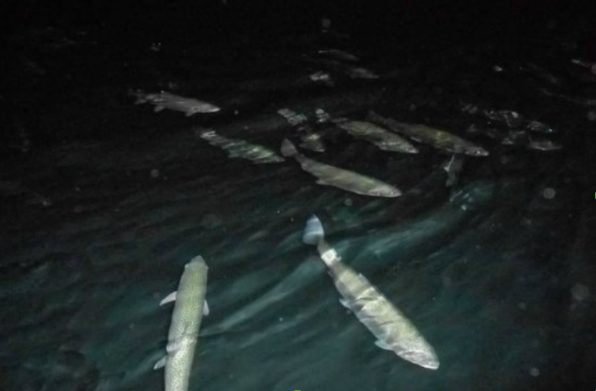 Yet another ‘greatest site under the Smokies,” Tuckaleechee Caverns are carved inside the world’s oldest mountain chain and estimated to be between 20 million and 30 million years old. At one end of the tour lies the Big Room. Measuring 400’ x 300’ x 150’, the Big Room is almost large enough to contain a football stadium.

The second half of the tour takes in Silver Falls, the tallest subterranean waterfall in the United States, measuring 210 feet from top to bottom. A crystal-clear stream runs through the caverns. Stalagmites here can grow as high as 24 feet. The site is open from March to November. Nearly 50,000 people each year visit the caves and take part in its presentations. 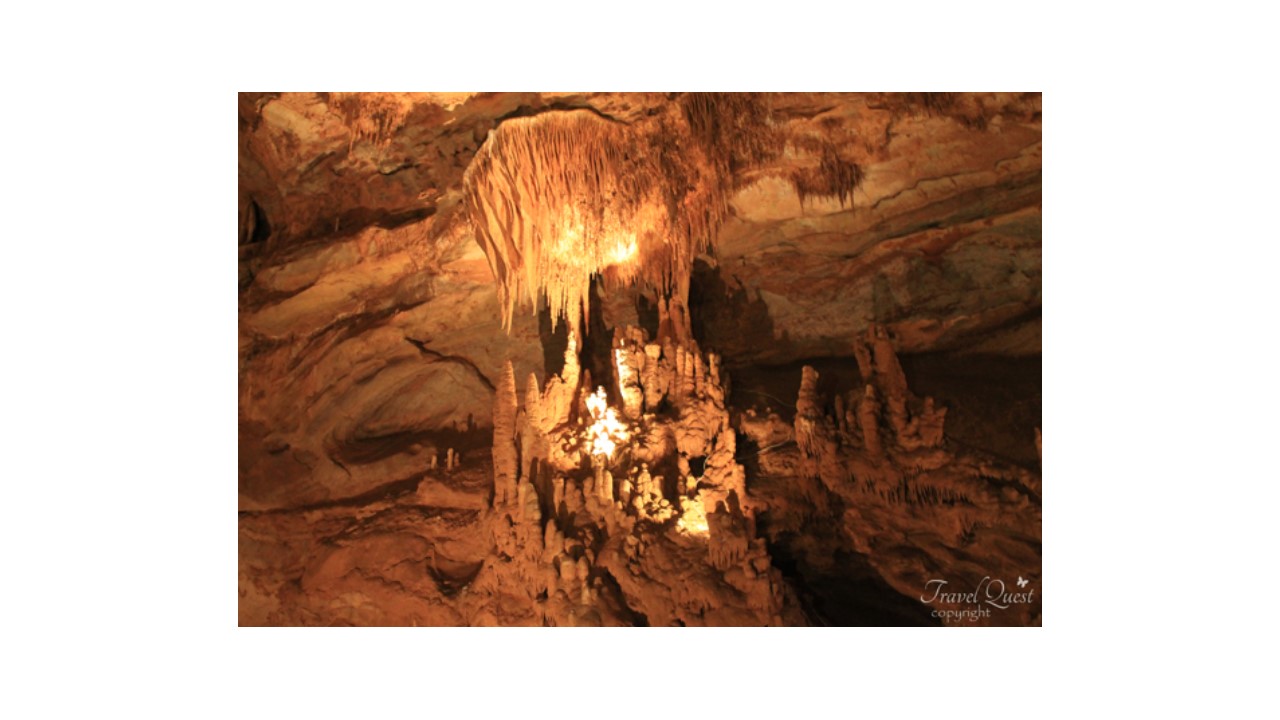 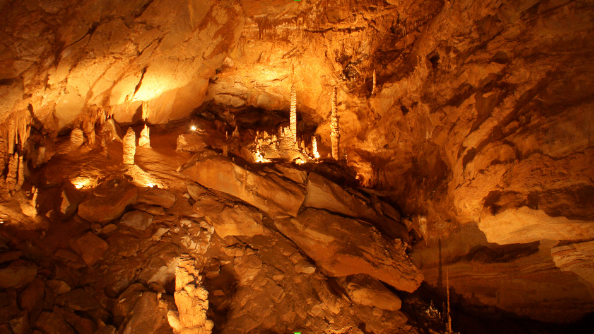 Figure 9 – Inside Tuckaleechee Caverns. The pointy objects are called stalagmites. Having been around for tens of millions of years, you could be forgiven for thinking these formations are rather robust. But no, they’re very brittle and will break like glass. Moreover, if you were to touch a piece of cave onyx, the acidic secretions from your hands would cause the lustre to go dull. Photo: http://www.insidetownsend.com/townsend-attractions/tuckaleechee-caverns/

There are steps and handrails throughout the one to two-hour tour, which includes a light show in the big room. While there is sufficient light to see your way around while you’re walking through the caves, at some point the lights are turned off so visitors may experience what real darkness feels like. 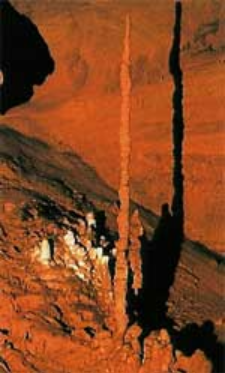 Figure 10 – The Toothpick stalagmite is 12 feet high and six inches across.

Like the Eastern Woodland Indians in the Forbidden Caverns, the Cherokee would hide here from the European settlers up until around 1850. The first white Europeans, who arrived between the late 18th and early 19th centuries, discovered the caves when sawmill workers observed heavy rain water falling into a local sinkhole.

The stable year-round temperature of 58F around the cave opening provided a clue as to what lay beneath. Residents in the area would dry their clothes there in the cool breeze. That same breeze is now channelled through the Tuckaleechee visitor center and gift shop to provide air conditioning. The caves opened in 1931 before being forced to close because of the Depression and reopened as a tourist attraction in 1953.

Of the more than 8,000 caves in Tennessee, no two offer the same experience. The systems described here barely scratch the surface compared to what’s on offer. You can choose from a rigorous hike and/or a boat ride if you’re not in the mood to get down and dirty scratching and clawing your way into and out of whatever nooks and crannies Nature has decided to tease you with. If you’re passing through Tennessee, come for the whitewater, but do stay for the caverns.

buying a cabin in the Smoky Mountains?